As we are interested in powers of two starting with a given set of digits, without caring about their overall magnitude, let’s plot a histogram of the values of

By using a simple python script and matplotlib, we get the following distribution: 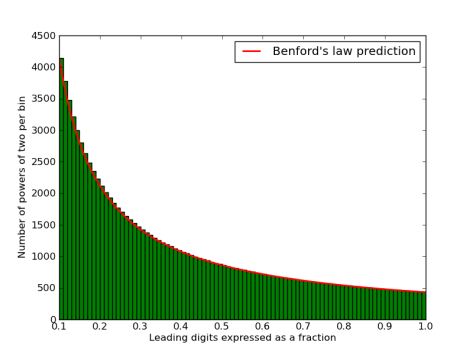 The previous plot, adding the prediction given by Benford's law.

making us expect a uniform distribution in log space

Distribution of the first digits (considered as a fraction between 0.10 and 0.99) of the first 100000 powers of two but grouped in logarithmic bins.

We are looking for a power of two

starting with a given sequence of

. By expressing the digits sequence as a fraction between 0.1 and 1,

, we can represent the desired condition by the following inequality:

As logarithms are monotonically increasing, we can apply them on both sides of the inequality:

is not a power of ten, we can translate the inequality to the fractional parts of each member:

such that its fractional part falls between two given real numbers. In the next section we will see how this problem can be solved.

By the Archimedean property of the real numbers, we know that there must be a natural number

Now, let’s analyze the distribution of

numbers inside the unit interval, we must have two numbers with separation less than or equal to

(it’s easy to prove by contradiction). Then there are two exponents,

where we know that the inequality with zero is strict because

is irrational. Then we can use the Archimedean property again to extend the inequality:

As all the involved numbers are in the range [0.1, 1), we can put the multipliers inside the fractional parts and we can also discard the first inequality because it's not important for our proof:

We have found that we can get a power of two starting with the sequence of digits we want, though we haven’t found any bounds on the required exponents. In fact, the powers of two follow Benford’s law and we can use that to estimate the magnitude of the required exponent:

So we can be quite confident that an exponent smaller than

should meet the requirements, though it’s obviously impossible to find it by brute force. But it should be feasible to compute values of

and getting the first 100 digits of